The present church building dates back to the mid 15th century. It consists of a nave with rood screen between the chancel, a tower with six bells, north aisle with Lady Chapel and a south transept (the Reynell Chapel). The church was restored in 1886. In the Lady chapel are stone slabs which covered the graves of two Abbots of Torre Abbey: William Norton 14th Abbot and Richard Cade 18th Abbot who died in May 1400.

In front of the Chancel step is the burial slab of yet another Abbot of Torre Thomas Dyare the last Abbot who died in 1522. It seems likely that these slabs were sold after the dissolution of the monasteries in 1539. Outside the church there are two halves of an early carved Christian burial stone built into the gables at the east and west end of the north aisle. The inscription is in Latin and reads “CAOCI FILI POPLICI (Caocus Son of Peblig) presumably a local chieftain who was given a Christian burial sometime around the year 500 AD.

The ecclesiastical parish of Ogwell including HM Prison Channings Wood in the south taking in West Ogwell, the old village and the four estates of Larksmead, Reynell, Abbotsridge and Ogwell Brook.

The Parish is linked with Wolborough, Newton Abbot, and is served by the Rector, The Reverend Russell Chamberlain. Please also see Wolborough Parish’s website https://www.newtonabbotparishes.co.uk/.

Sunday Service is usually at 11.00am

You will find the most recent updates and information posted below! 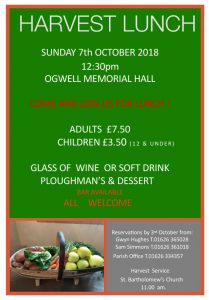